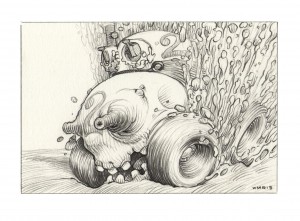 There’s something about mud and machines that appeals to me. 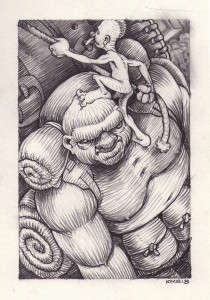 I have been working on this sketch for about three hours now.

I have to stop. I drew the little sketch (underneath) so I would have a reference for what his neck would look like and would it be possible for someone to crane their neck that way.

I wanted him to look somewhat like a turtle. 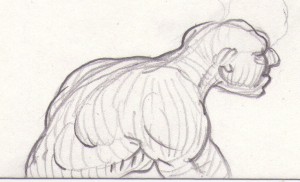 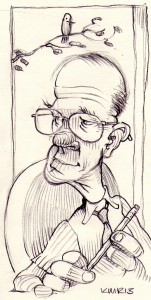 I have a show at Rev. Please come down.

I am so distracted right now with other ventures, I haven’t been posting much.

I am really creating a bunch, but nothing is finished. 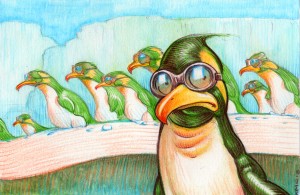 I am not one to talk about the weather, unless I’m on an elevator and feel like talking to a stranger. Even then, I like to remain positive.

Having said that, I am very impressed by how long the cold has stuck around this year.

I have an on-site job at Georgia Tech Research Institute and walk part way to my office (I refuse to pay for parking). This walk includes navigating up roads lined by very tall buildings which means shady and windy sidewalks. It makes for a very cold journey.

I am ready for the warmer weather. 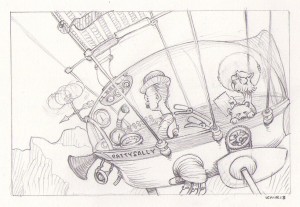 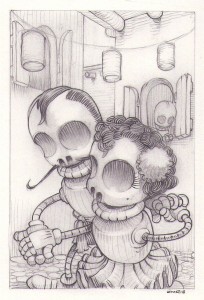 I wanted to wait until after midnight to post this sketch. I didn’t want you to think I was sappy. Although, I do believe in true love and love at first sight. 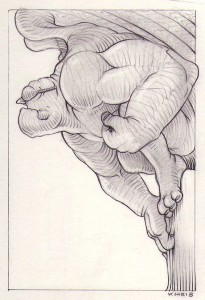 When I was little, I had a reoccurring dream about a snowman that lived in the heaters in our house.

He would come out when everyone was asleep and invite me to play. I really enjoyed those dreams because he made me feel special.

This isn’t the same snowman, in fact this guy wasn’t meant to be a snowman at all.

That’s funny, this sketch somehow reminded me of my childhood dream. 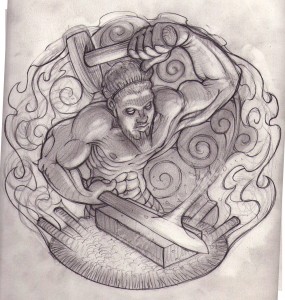 This is Vulcan god of the forge, lava, smoke volcanoes, various other fiery sundries and whatnot. I am trading out with a friend of mine, Neil Carver.

The plan is to paint it four foot by four foot. 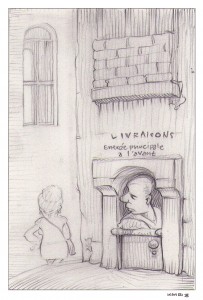 He works at a bakery.

Every morning, about two hours into his shift – about 6am – he walks over to the delivery door to listen for the distinct sound of a certain woman’s heels. As the sound gets louder, he gets ready to catch a glimpse of her. He is careful to stay in the shadows as she passes. As soon as she gets a safe distance away, he emerges from the dark to watch her round the corner and fade from view.

This has been part of his daily routine for about the past two years.

After she passes, he stays in the hope that he can catch a waft of her perfume. Even over the heavy smells of baked goods, he can smell sweet lilies. If he closes his eyes and concentrates, he can see himself in front of her, both of them smiling. They’re sitting at a bistro table sampling wonderful foods and drinking the finest wine.

But, he never says hello.

Because, he figures, they would get married, they’d have a couple of kids together, he’d get fat and die because he would hate his life after that.

I kept the lines quite sketchy and didn’t do a lot of rework on this one. I rubbed on it more than  usual to get less contrast.