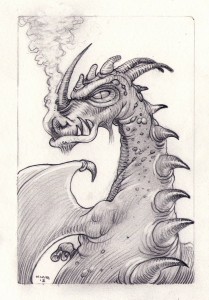 I stood paralyzed with fear in front of the scaly, hulking creature that stood before me. It opened its mouth and let out an almighty roar. I screamed in terror as blisteringly hot air danced across my skin, and I smelled the monster’s putrid breath. As the beast rose up on its back legs and flapped its massive leathery wings, I was able to take in all of the creature’s characteristics. It had rows and rows of jagged, gleaming teeth the size of butcher knives. Its nostrils were flaring as it took in great nosefulls of air, as if it was deciding if I was good enough to eat or not. As the beast started to crawl toward me, I cried out in horror at the foot-long talons that were twitching, as if the brute was dying to slash me to shreds. The creature’s huge, cat-like eyes with slit pupils stared down at me as if sizing me up to be a tasty snack, or a delicious meal. On its head was a long, sharp horn that could easily run a person through. Following the long horn was a row of smaller horns that formed a crest on top of the dragon’s head. In my haste to get away from the scaly nightmare, I stumbled and fell backwards. I gazed up in fear at it, and the hulking beast gave me a look of death. It flicked its spiny, poison-tipped barbed tail, and let out a hiss. One tiny swish of its tail, and I would be dead, forever gone from this world. I quickly scrambled behind a rock and curled up into a ball. I closed my eyes and prayed for it to all be over.

This is one of the winners of “Imagine That” at the Smyrna Library. She’s also a patron of mine. Thank you again, Mary.