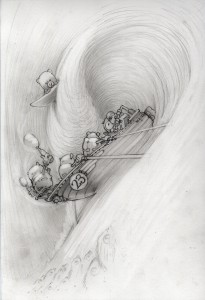 It’s the small victories in life that mean so much sometimes. I have a spot on my  counter that’s been there since I have remodeled the kitchen five years ago. It’s something I look at pretty much every day of my life. Up until yesterday, I thought it would be there until the day I die. I was waiting for the pot to boil and had a minute to spare. Then, the idea came to me…why not use rubbing alcohol? It worked, and no more spot. A five year old eye sore, gone with a couple of swipes with a paper towel. I have wiped that thing down countless times in the past five years and now it’s a mere memory. I will milk this feeling for at least the rest of the weekend.

If you look at this sketch and think, “aw, how friggin’ cute…” then I have succeeded. I really pushed the perspective here. There is no sky, just more water crashing around these guys. No worries, though, they can’t drown. This sketch will be a prime candidate for painting soon.