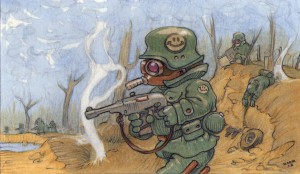 I almost named this War for Peace.

Happiness is a noble pursuit and it’s a never ending battle.

I was talking to my buddy, Thom down at Lillie Glass about traffic around town these days.

It has the potential to destroy anyone’s good mood in about a mile and a half.

I personally try to give speeders the benefit of the doubt. If they are faster than me, I move out of their way. And I try not to get angry when someone cuts me off. I have to let this stuff go as soon as it happens, because my happiness is in serious jeopardy at this point,and if letting it go and letting the other guy “win” allows me to be happier longer, then that’s what I will do.

My philosophy when it comes to irate drivers:

They either have something to prove or nothing to lose, either way, I don’t want to make it my business.

Let them by so they can go pursue their own happiness.