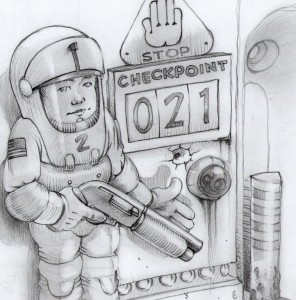 A bit of Sci-Fi for this Labor Day. Any artist worth his salt has to be, or has been a sci-fi fan. You just have to be to get your artistic license. It’s the law. If you haven’t seen Firefly yet, I highly recommend it as a great series. It was cancelled back in 2002 and due to the popularity, they finished the franchise with a movie named after the ship,  Serenity. It won an Emmy in 2003 for Outstanding Special Visual Effects for a Series. The reason I bring it up is because it is my favorite sci-fi series of all time.

Our main character here seems to be a tad young for his post, let alone the fact that he’s holding a firearm. It started off to be a simple “Kids in Space” type drawing, but took a detour after a bit of imaginating (verb; means to imaginate). I was going to draw the remains of a giant bug to the right of our young friend, complete with shiny guts, but decided against it and opted for the safer “Checkpoint” backdrop. Still, I wouldn’t want him to be unarmed, hence the sawed-off.