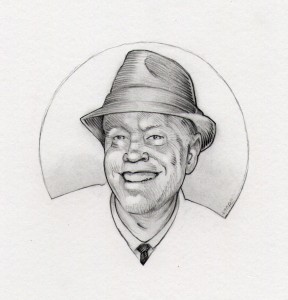 “If a patron buys from an artist who needs money (needs money to buy tools,
time, food), the patron then makes himself equal to the artist; he is
building art into the world; he creates.”

This is Doug, a really good friend of mine and also a patron. He has been my friend for years and a patron for the last couple of months. I’ve had two successful shows so far. The majority of my art has been purchased by family and friends. Doug has brought it upon himself to purchase about a half dozen of my pieces or so, hence the patron status. I thought it was time I did a portrait of him. Thank you, Doug. I appreciate you.

I sketched his face in about two minutes. The contour lines took quite a bit longer. Overall, it took about an hour to complete. I used the new technique sparingly for a couple of reasons, first, I wanted to keep the interesting contour lines prominent, and the second reason was to shade the background slightly to keep him separated from the circle.