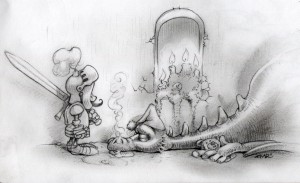 When the boys were younger and if we traveled any significant distance (this is pre car-DVD players), I would make up stories. One of my characters was Senior Wenceslaus. I had heard this name on the radio and I liked it. As you can probably tell, he’s a little guy. He has to be, since he lives in the glove box. Anyway, you can probably make up your own story. I have another drawing I’m working on starring our friend here.

I left a little of the unfinished part of the dragon in the image. I wanted to talk a bit about the contrast in the two styles. If you recall, I talked about “sketchy” lines yesterday and how I developed the space lizard from them…well, you can see, there aren’t any sketchy lines to the right of the dragon. That’s because, I drew them last and knew exactly where they were going. Most of the sketching was done closer to the dragons head. I hope that makes sense. I very well could have done some crazy lines and ended up with wings, or a stack of stuffed animals, or…but, I wanted the focus to be between Senior and dragon.