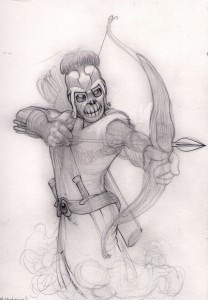 In my world, their are assassins so mysterious, they are thought to be ghosts by some. They’re known as Uks. I know it’s a very strange name. The legend is that their name is actually a lot longer, but the only man to dare say the full name out loud was assassinated before he could utter any more syllables of it. After hundreds of years, people stopped saying the name for fear of swift death and the name was lost forever.

I left this sketch very loose to give the illusion of camouflage. Not the pattern, but the actual blending in with the environment. I meant to keep the focus on the eyes, therefore, I spent most of the time on the detail.