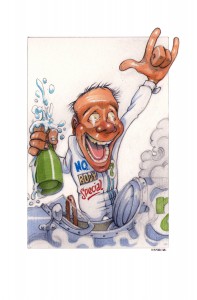 Dodge ball, or “Bombardment” as it was known in upstate NY, was always a popular sport among the kids. I would play every chance I got. I had figured out if I stand near the back, my chances of survival were greatly increased. This technique served me well.

This particular match was no exception. It was down to myself and one other person. On the other side was Kenny Walters, a sixth grader with a wicked arm. Outweighed and outgunned, my chances seemed bleak. My strategy was to block his first throw and try and peg him in the ankle when he reached down for another ball.

He wound up like a pro pitcher and let fly. Turned out, his technique was to whip it at my head, which in nineteen seventy five was perfectly legal, in fact some would argue it was a sound strategy for a quick win. I missed the block and his ball hit his mark. The ball slammed into my face, bounced off the back of the ball in my outstretched hands, back to my face, back to the ball and finally rested between my arms. I had “caught” the ball and won the game. I beat the odds and better still, Kenny Walters, a sixth grader.

At that moment, I moved a bit closer to being the man I am today.

I am getting more comfortable with color. I am figuring out what colors I am supposed to start with for different objects and textures. I like to start out light and gradually work to the darker shades. I use this same technique with watercolors as well.