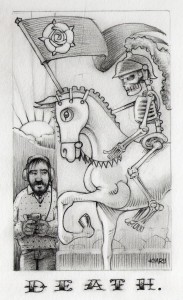 Now, I do not believe in fortune telling at all. Only God knows what’s in store for us, and he’s keeping it a secret. I picked this card for it’s cool symbolism. So, before I am accused of anything other than what it stands for, I will give you an explanation. First and foremost, The Death Card is a representation of the end of something. A relationship perhaps. It represents death of all kinds, meaning, the death could be anything from a houseplant to a career and yes, it may also mean the death of a human. But as we all know, a new beginning is a result of the previous new beginning’s end. To some, that may be scarier than death itself. By the way, Tarot cards are really old and popular belief is they were the forefathers of the decks of cards we use today.

The emphasis is on layout in this sketch. The horses head and leg create a definite plane with the side of the building, allowing me to frame out the figure to the far left. That way, they are not competing with one another.