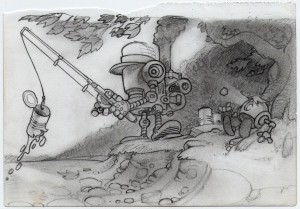 Okay, I have to admit, this isn’t a sketch done recently. In fact, it’s a sketch I did about 3 years ago in a small pocket sketchbook I carried with me at the time. What makes this sketch so special is because it was the first sketch in my RoBot world. I named it fishing with Grampy, because that’s what my niece re-named my dad about 16 years ago. I think the name is too close to “Grumpy”, or even worse, “Crampy”. Sorry, Dad, it just is. My mom’s name is Grammy. Now, that’s a cool name. Very English. My Grammy’s mom was Big Grammy to us kids. I’m not sure why because she was a relatively small woman. Pay attention, I’m gonna quiz you later.

The sketch is a bit older, so I really can’t recall what the heck I was thinking at the time. All I can do is describe it to you as if someone else did it.

The artist clearly has a huge fear of abandonment. Obviously, the extreme use of dark shades means he views the world as a dark place and he longs to crawl back in the womb. Kidding. Grampy is the start of a steampunk introduction. It’s one of my favorite art forms, combining the new with the antique. Lots of brass and leather. Kind of fitting, since he’s a much older RoBot. The scene is on the eastern shore of the lake at dusk. The reason I knew this is because the scene is from my memory of Owasco Lake in the summer. If you’ve been to my main site, you’ll see the start of a painting similar to this drawing.