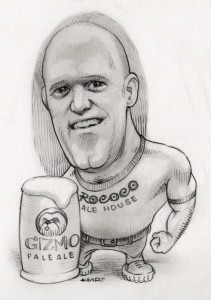 This was a portrait commissioned by a mutual friend. His name is Hal Prather, amateur brewer of amber nectar and dog lover. I was in Roam the other day and a gentleman I had met a month or so ago, drew my portrait. I was flattered. It’s rare that I am on the recieving end of a drawing. My friend is a world-class cook and has friends over for dinner often. After they eat, the couples declare how wonderful the food was and that they won’t embarrass themselves by having her over to sample their feeble attempt at cooking. So, how often does she get to go to a dinner party? Maybe that’s why she has them over so often.

You’re probably thinking I would do something in commemoration of the Horror of 9-11-01. For this, only words. I believe it was a crime against humanity and that all nations suffered and not just the ones with nationalists in the buildings when they collapsed. Taking a human life for any sort of gain is fundamentally wrong in my opinion, but don’t misunderstand me, I think stupidity should be painful. There are some times when retaliation is justified. I guarantee, if someone gave my sister a black eye, I’d be plotting something for them.

By the way, today is Hal’s birthday. I wonder what his thoughts are about the eleventh of September?