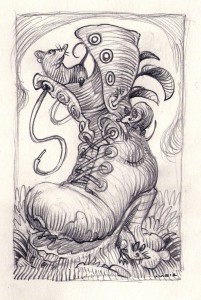 If you don’t have a clear idea of what you want to do with your life, you will work for someone who does.

It amazes me what we, as a collective, believe. We argue about politics, but yet they really don’t directly impact our daily lives. I stopped following politics closely about five years ago. That is about the same time I gave up watching The Sopranos. I just don’t need that useless shit filling my head. I read about current events just so I know what’s going on in the world, but I don’t “take a stand” one way or the other. If you ask me how I feel about the current president, I will tell you, “He has a tough job and he’s doing what he thinks is best for the country”. That’s it. If someone else occupied the office, I would say the same thing about them. Any more than that is just my crappy opinion about useless crap and frankly, I would rather talk about what I had for lunch.

I am really digging the new technique. It’s really obvious here. I didn’t blend anything at all in this sketch. I am letting the lines truly define light and shadow.

Oh, and as far as giving my opinion about artists, I appreciate every single one of them.