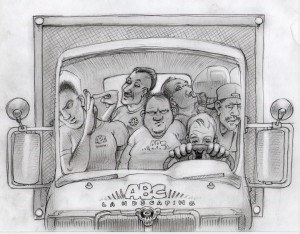 The more someone gets to know you, the more they treat you like family. This is not always a good thing.

It amazes me that we spend more of our normal weekday with co-workers than with our own family. My work-wife of many years, Ally Peters, PMP,  was shared throughout our department. She had about nine husbands and took care of each and every one of us. She called us her boys. She was all southern belle but, don’t let the pretty exterior fool you, she was tough. She could drink us all under the table and had no problem calling you out for being a doosh. We said she was a dude in a chick-suit. She had our geniune respect for sticking up for our team and giving us a voice within the company. Every morning, about five of us and Ally would get coffee together and talk about what we did that weekend or our plans for the following one, depending on where we were in the week.This dynamic lasted for a litte over six years until our department was dissolved. Ally was the only one from our group that survived the cut. As most things in life, it’s only after it’s gone do we truly appreciate it. Thank you, Ally for creating the healthiest work environment I’ve had so far in my life.

The subject matter is based on my best friend, Larry and his crew. I deliberately left the windows in the interior of the truck blank, so there would be more separation between the crew and the truck. Larry is drawn with a bit more contrast than the others, therefore he sticks out a little more.