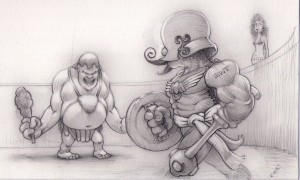 You see, Kvle kind of stumbled into this profession. He started doing it to put himself through Horticulture school. After he graduated he found the money was far better when he could pick up some day shifts, so he decided to do it full time, but only to save up some money, then he will by a suit, get a haircut (literally), and get a real job. This is exactly what he told himself.

At the moment captured in this sketch, Kvle is sad.

Ten years after that fateful decision, he finds himself doing exactly the same thing he was doing then. Apart from the lovely herb garden Kvle keeps in his back yard, he is no closer to his goal of being a top dirt doctor then he was before he graduated. To make matters worse, his popularity is growing within the gladiatorial circles. Normally, this would be wonderful news, however, his adoring fans have given him the moniker “Baboon Boy”, when Kvle clearly resembles an orangutan.

This is obvious to Kvle. What frustrates him the most is the fact that he would have to head the crusade to educate the public regarding the differences between the baboon and the orangutan and he knows he just doesn’t have the inclination nor the patience for that.

But, it really doesn’t matter, because after his chance encounter with this Wenceslaus, he will never step foot in an arena again…

That’s my friend, Arta, in the stands. She’s a dancer. I gave her junior high school eyebrows.

I am really playing with atmospheric perspective through blurring. I kept WENC in sort of a shadowed state to really draw him closer to the viewer, therefore pushing everything else out in the light/background. Imagine the stands filled all the way to the top of the drawing with people. That’s what I’d do if I were to paint this. 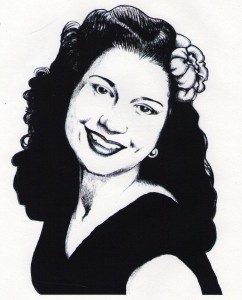 I did this sketch a while ago for Century Granite. I would sketch a drawing of a person, place or thing and through an etching process, they would transfer it on a grave marker (notice, I didn’t say tombstone nor grave stone?). This was one of my favorite sketches. From what can I remember, the photo was taken just before WWII. I imagine some GI carried this photo half way across the world in his helmet.

I know I would.

I really enjoy the high contrast look every once in a while. It’s a simplified version of reality that’s pleasant to look at and easy to comprehend. What I like most about this sketch is how simple it is, and yet her essence isn’t lost at all. 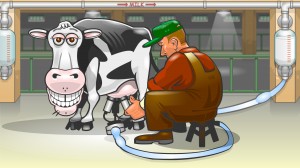 I did this Cow Animation a while ago with a good friend of mine. I am amazed at how fast time flies. I read somewhere that the older you get, the cooler you run (in other words, your core temperature cools as you get older). This may slow your reaction time, thus making it appear time is moving faster. My son told me he is convinced he was eight years old for way longer than a year. I feel like I blinked and he was nine.

I had a dream the other night that my oldest was four again and we were watching TV. In the dream, I put my hand between his shoulder blades like I used to and I could feel his tiny little spine on the tips of my fingers.

What a gift that was. 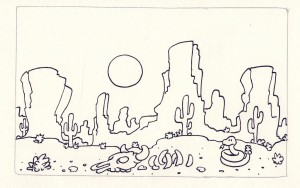 This sketch was for a background for an animation I did about twelve years ago. I colored it in photoshop, however I cant find that file. I wanted it to be very simple, so it would be glaringly obvious it wasn’t to be taken so seriously.

Looking at it now and thinking how much my style has changed, I wonder what it would look like if I drew it knowing what I know now.

It’s funny how we never stop learning or evolving. Things that were so important to me five years ago don’t matter at all now. 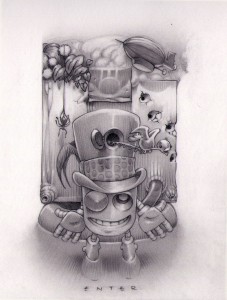 I love creating different textures in my sketches. This one is no exception and there’s a lot of them, hence, the title. It is for a landing page for kmrucker.com.

I am blending my sketches a lot more lately. I love the tones it gives me. It makes it really easy to pull highlights and push shadows around. This may be the next evolution of this technique. 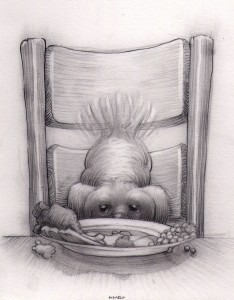 Well, it has finally happened. I missed a day for the Sketch of the Day. It gives me that same feeling I got when I scratched my truck for the first time. Now the pressure is off. I don’t have to worry about scratching my truck any more.

My computer was infected by the W32/Blaster.worm. Basically, some doosh invented this virus to act like an Anti-virus software program on your computer and exclaim, “You have a virus, quick, pay us fifty dollars and we’ll make it go away!”. I have to admire the thought behind it.

I really blended the heck out of this sketch. I wanted to give it a darker, more smoky look. I didn’t use a dog for a reference. Instead, I drew it from memory. It’s my buddies current dog, combined with the shitzu he had growing up. The dog I had, growing up, was not as cute, nor was it an inside dog, so this was what I came up with it. 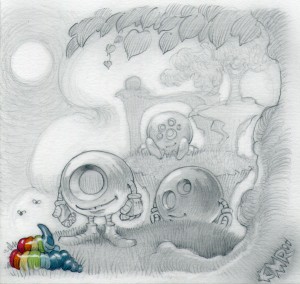 I have been taking personal inventory on a micro level as of late. I am going through my house, drawer by drawer, closet by closet, figuring out what to keep and what to throw away. I am hardly a hoarder. My house contains everything I need and very little of what I can live without. This is an attempt to get the very little even littler. LOL, how often do you get to use “littler” in a sentence? Funny, because I chuckle when I use “do do” in conversation every time also. Which brings us right back to the drawing…

If I had more time, I would have really played with atmospheric perspective here. Next drawing or so, I want to really play with blurring objects to make them look farther away, or too close to focus in on. I have officially decided to adopt the technique I have developed over the past few months. Or, maybe it’s adopted me, I’m not sure yet. The next logical step is to attempt something like this. Pretty mindblowing, huh? 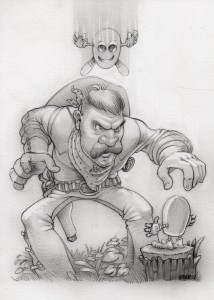 The sheriff is a good guy, he’s doing his job and bringing a suspect in for questioning. I was gonna name this one “First Encounter”, but surprise won out because I wanted the viewer to get a sense of the playful nature of the RoBots as well as the surprise the sheriff is gonna get.

What would you do if you came upon an alien? Say, you were out camping, or better still, someone posts on Facebook that aliens have landed and you turn on the news and there it is, the mothership over your city…what would you do? I would promptly soil myself, drop to a fetal position, and cry myself to sleep. Not sure about after that. I’m kidding, actually. I don’t know what I’d do. I believe in ghosts and aliens for the most part. I think I’ve seen a few ghosts but no aliens…..yet. 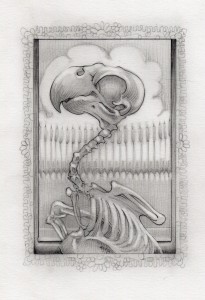 I am no longer a “pet” person. I haven’t been for about two years. The concept of keeping an animal in your house – let alone buying special food for it – is so foreign to me now.

For the sake of time, I fused a lot of the bones together, so this isn’t an accurate skeleton. I leveraged my artistic license, like a pro and drew the cool, eye candy elements. The tarp background is sporting a cat tail (or “cotton tails” as my British friend, Grant calls them) pattern. The skull was my primary focus and was originally going to be “Day of the Dead Parrot”, but turned into what you see instead. I left the floral latinesque border but didn’t develop it anymore than just a first-pass sketch. 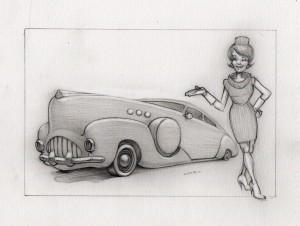 Did you know that the Ford Mustang was named after the P-51 Mustang?

Did you know this car that I just drew is actually named after the Led Zeppelin song, Moby Dick? Yeah, I did that, just now.

I kept this sketch simple, just so I could concentrate on the lines of the car. I kept the tires small to make everything else look massive.